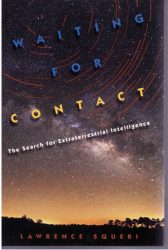 The search for extraterrestrial intelligence (SETI) is one of those niche topics that has evolved throughout the Space Age – in this case, from academic thought-experiment to volunteer data-analysis programme (in the SETI@Home project). This book tells the story of the SETI movement from 1959, when astronomers started using radio telescopes to listen for signals from space. In what the blurb calls a “one-of-a-kind history”, the author looks at “the people, reasons, goals and mindsets” behind the search.

This is a relatively short history of a long-running and multifaceted project, but that is a key attraction of the book. It is extremely readable and sufficiently comprehensive to satisfy most readers; perhaps the author’s admission that “SETI excited me” has something to do with this. And for those interested in delving deeper, there are 30-odd pages of chapter notes and bibliography and, thankfully, an index.

Unusually, in this image-rich era, there are no illustrations beyond the photo on the cover, but that is somehow fitting for the subject. SETI is the ultimate zero-data-point experiment; there is no proof of the theory and yet belief in the existence of extraterrestrials persists. It’s a bit like a religion in that sense. The difference, however, is described well by the author who says that “information should not be confused with wisdom. A search for wisdom will invariably set humanity up for disappointment”.

The arguments over whether SETI (and its sister subject CETI – communication with extraterrestrial intelligence – which actually predates SETI) is a good idea will continue; as will the arguments over who should fund it. As a non-parochial philosophy, however, SETI is good and, as the author points out, has “spawned new technology”…so long may it continue as a quest. Despite the absence of even a first ‘data point’, believers will continue to be comforted by the popular aphorism: “absence of evidence is not evidence of absence”.