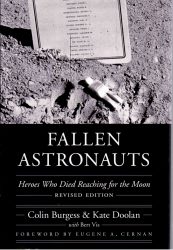 The somewhat sombre title of this book could be misunderstood as a tabloid-like headline that seeks to exploit the deaths of brave space explorers, but nothing could be further from the truth. This is a memorial to their accomplishments and sacrifice, and a celebration of their lives.

In fact, the title comes from the name of a small tin figurine – The Fallen Astronaut – placed on the surface of the Moon by astronauts Dave Scott and Jim Irwin towards the end of their Apollo 15 mission. Along with a small plaque bearing list of astronauts’ names, the laying and photographing of the figurine was part of a “secret ceremony unsanctioned by NASA”, according to the authors. The photo itself adorns the cover of the book.

The volume is effectively a mini-biography of deceased American astronauts and Russian cosmonauts involved in their respective nations’ efforts to land men on the Moon; as such, readers should not expect to find details of the potentially better-known deceased Space Shuttle astronauts. The book is illustrated with black-and-white photos and includes a list of “sources” and an index. It is an update of an original edition published some ten years previously and includes “a greatly expanded source of information, photographs and stories on the lives of the eight American astronauts and eight Soviet cosmonauts”.

Understandably, this was not an easy book to write. On the American side, the authors initially faced a wall of silence from friends of the dead astronauts: many were “mistrustful”, they report, “because of an odious commercial market in astronaut signatures”, but were eventually assured of their “best intentions”. On the Russian side, they faced a background of political propaganda: the cosmonauts’ “true stories are substantially marred”, they say, “by years of untruths and a state-manufactured glorification”. Even Gagarin’s real story will “probably never be told”, they conclude.

This rather sad book is, as one might expect, about astronauts dying in a capsule fire and on training flights – effectively ‘in the line of duty’ – but Ed Givens’ story sheds a rather different light on the ‘death of heroes’ theme. He met his end in a simple car crash on a dark rainy night in Texas. It’s another indication that those early space pioneers were human and ‘just like the rest of us’ after all.