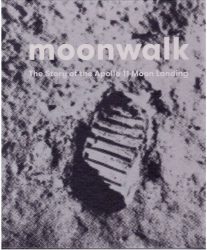 Just when you thought every book on Apollo that could be published had already been published…along comes another one. The difference here is that this one is written by an architect, illustrated by a graphic artist and harks back to an earlier, gentler time. Its simplistic style – a double-page spread with a single paragraph of large-print text and an illustration – suggests the target market is children, as does the low page-count (I know there are 46 pages because I counted them myself, there being no page numbers).

In one sense this is an art book. The pictures are photographs – often well-known shots – that have been given an ‘artistic treatment’…which typically means screening them to look like old newspaper photos with a half-tone dot pattern. In some cases, this gives the book a 1970s feel, but I’m not convinced the readership will appreciate the ‘artistic degradation’.

The text tells the story of the Apollo 11 mission – as promised by the book’s subtitle – and will be familiar to most space-aware readers. It concludes with a ‘Did you know?’ section of 18 factoids, from the parts-count of the Command Module to the length of the astronauts’ quarantine period. It also recalls that one of the samples collected at Tranquillity Base was named Armalcolite after the three astronauts (Armstrong, Aldrin and Collins).

Despite its old-fashioned and minimalist style, this book has its place. In fact, its design may well have been formulated to appeal to parents or grandparents who remember this type of book. Perhaps it is best suited to that long-forgotten era of fireside storytelling in which parent – with offspring on knee – read, explained and embellished the story within. Let’s face it, the ‘Story of the Apollo 11 Moon Landing’ – the first time beings from this planetary body walked on another – is worth telling!