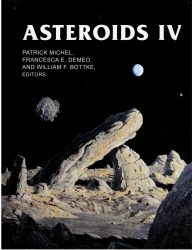 It’s impossible not to notice that this is a doorstop of a book! It’s more than two inches thick and weighs two and a half kilograms. That’s not a particularly scholarly assessment, but it makes this quite a tome.

Well within the collective living memory of the space exploration community, asteroids were viewed simply as a bunch of rocks in a conveniently labelled ‘asteroid belt’ between Mars and Jupiter. Because the technology had not been made available to visit and image their surfaces, they remained a part of the solar system that, in earlier days, could have acquired the ‘Here be Dragons’ label. Now, with spacecraft orbiting asteroids, mining companies sharpening their pick-axes and the Earth-impact hazard widely recognised, asteroids have entered the public domain. As the Foreword to this volume states, “asteroids matter”.

Asteroids IV provides “the latest scientific foundation” upon which future scientific research and commercial development will be based. In 43 chapters, “more than 200 international authorities” convey the definitive state of the field by “detailing current astronomical, compositional, geological, and geophysical knowledge of asteroids, as well as their unique physical processes and interrelationships with comets and meteorites”. The contributions are, effectively, academic papers and must be read as such; in other words, this is no asteroid primer. But that’s evident from the size and price of the book.

It is illustrated throughout with black and white photos and diagrams and, hidden away between pages 678 and 679, a colour insert provides additional illustrations of the data. Finally – and absolutely crucially for a book of this type – there is a substantial 15-page index.