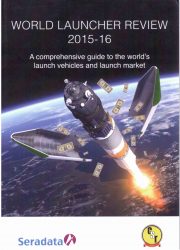 Although this is more of an industry report than a book, in the words of its subtitle it offers “a comprehensive guide to the world’s launch vehicles and launch market”. Its eight sections cover the launch market itself, vehicle technology and reliability, commercial launch providers and commercial spaceports; others provide overviews of current and proposed launch vehicles, including a class of ‘very small launch vehicles’ which it defines as having a capability to launch “under 100kg” to low Earth orbit (LEO).

The publishers, and their staff who act as authors here, have decades of experience in the space launch market and are well-placed to compile the review. Commercial Space Technologies (CST) is, among other things, a broker for Russian and ex-Soviet launches and Seradata publishes the SpaceTrak satellite and launch vehicle database used by the space industry.

For those requiring a reference source for the launch vehicle market, this is a useful and very accessible publication. It is well illustrated with colour photos and diagrams and includes specification tables for each of the main vehicles. As with any text on the subject, some of the information on proposed vehicles soon becomes out of date, but the majority of users will be up on recent developments and this does not detract from the review’s utility as a reference guide. The only downside is that its high price will place it out of reach for those unable to acquire it via their company’s ordering system.