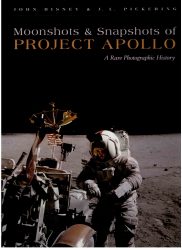 The photographic story begun in a sister book on the Mercury and Gemini projects continues in this volume with the Apollo missions. As co-author J L Pickering writes in his introduction, “when I think of an iconic photo from Apollo 1, unfortunately that of the charred spacecraft comes to mind”. So, in the spirit of making the book different, the authors selected a “gag photo” of the three astronauts praying round a model of the command module. The astronauts themselves had given a copy to programme manager Joe Shea with a note that read: “It isn’t that we don’t trust you, Joe, but this time we’ve decided to go over your head”. Sadly, divine intervention was absent when their capsule caught fire in a launch pad test.

The book features rarely seen photographs of each of the Apollo missions as well as Skylab and the Apollo-Soyuz Test Project, and is printed on high-quality gloss paper. Looking at the best-known mission, Apollo 11, the chapter includes some well-known shots for context, but most are new to this reviewer. Among my favourites is a candid shot of the three astronauts talking to reporters in the afternoon light with the Saturn V at pad 39A in the background: Collins, in orange shirt and white vest, glances at the ground; Aldrin, in a blue cardigan, stares into the middle distance; Armstrong, with hands on hips, looks relaxed. It’s as if they’re about to go on a fishing trip, not make history!

The Apollo 11 chapter opens with the familiar shot of Aldrin near the Eagle’s footpad with Armstrong reflected in his visor, but the keen-eyed will notice something unusual about the image: it is cropped right across the top of Aldrin’s backpack and seems poorly framed. The reason is that Armstrong could not see what he was shooting and, to a large extent, had to point and hope. As the caption reveals: “A black background is commonly added to the top of the photo to provide better visual balance”.

The volume concludes with a list of abbreviations, a bibliography and, fittingly, a section on “The Photographers”. It adds a new and important perspective to the early American space missions and will grace any space aficionado’s bookshelves.