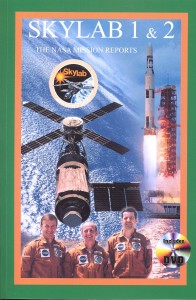 Today, any mention of ‘the space station’ automatically invokes the International Space Station (ISS), but it was not always so. In the early 1970s, when the Apollo lunar landings were still fresh in the mind, a NASA space station called Skylab was making news.

This book commemorates the Skylab 1 and 2 missions, the first being the launch of Skylab itself, the second being the 28-day mission of the first crew (Pete Conrad, Joe Kerwin and Paul Weitz). This volume is the latest in Apogee’s long-running series of NASA Mission Reports and comprises facsimiles of press kits, post-mission reports and technical debriefings. As the Skylab station suffered significant damage to its solar array and meteoroid shield on launch, there is also a copy of the investigation board report.

At a time when the continuing success of the ISS has largely removed that space station from the media headlines, this book serves as a useful reminder that things do not always go well with space missions. Faced with an orbital workshop whose internal temperature had risen to uncomfortable levels (because part of the insulation had been torn off with the meteoroid shield), the first crew worked hard outside the station to erect a temporary sunshield and to free the remaining solar panel to provide power. The 110-page transcript of the debriefing provides a fascinating insight.

The book is illustrated throughout with original line drawings and black and white photos of the mission and its hardware. And because this is an Apogee Books publication, it comes with a ‘bonus DVD’ bound inside the back cover. This includes footage of the pre-flight press conference, the launches of the Skylab 1 and 2 missions and a documentary entitled “Skylab: Mission Made Possible”. All in all, a great package.