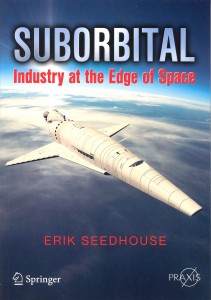 No-one with any interest in space can have failed to notice the rise of the commercial suborbital tourism market – or at least the promise of same. More than a decade since the Ansari X-Prize was won, Virgin Galactic has still to fly a fare-paying passenger, which means that books on the ‘Newspace’ industry and space tourism have been heralding this new age for quite a while now.

A difference with this book is its leaning towards the training and medical aspects of the field, which reflects the author’s experience and interests. In fact, the page “about the author” is almost as interesting as the book itself: an astronaut training consultant with medical qualifications, Seedhouse “supported his studies by winning prize money in 100 km running races” (yes, hundred kilometre!).  Among other things, he set the North American 100km record, won the World Endurance Triathlon Championships in 1995 and 1996, and also the Decatriathlon, which he describes as “a diabolical event requiring competitors to swim 38km, cycle 1800km, and run 422km, Non-stop!”.  One wonders what he does for relaxation: oh yes, write books…

So is this one a winner? Surprisingly, considering his penchant for excess, Seedhouse has written a rather short book: only 162 pages of main text, with another 20 comprising appendices and an index.  To be fair, the “commercial suborbital spaceflight industry” (such as it is at present) is also fairly slim, not only in terms of companies and revenue but also in accomplishments. So there’s not that much worth writing about.

As far as it goes, the book is a useful summary of the story so far. It begins with a brief history of suborbital flight, including the X-15 and SpaceShipOne, then discusses the potential suborbital market. The latter is based on a 10-year forecast by the Tauri Group, which predicts an annual market of “500 seats” by year-10; of course, when this actually is depends on when year-1 occurs. The book then moves on to training the participants and reviewing the companies involved so far and the spaceports they might use. The author also covers other applications of commercial vehicles, such as flying science experiments and other payloads. It ends with a chapter called “How to get there”, but it doesn’t finish with any sort of conclusion and the reader is left asking “So what now…?”.  Well, now we just wait for the market to open.