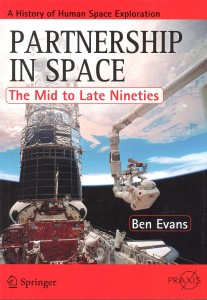 This is the fifth book in what the publisher calls Ben Evans’ “History of Human Space Exploration miniseries” – hence the rather specific and confined subtitle. For those who enjoy space history, it’s important to say from the outset that Evans is a self-confessed “space enthusiast” and not a professional historian, engineer or technologist.  You will find no references and chapter notes in this book, although there is a bibliography and an index (mostly of names).

Who is the book aimed at? Probably other self-confessed space enthusiasts. In his preface, Evans himself seems ambivalent: the reader, he says, “may love or hate my book…but I have derived great joy from researching and writing it”. However, he is right when he says that the story of “our adventure in space is not simply about who spent the most time there, who performed the most spacewalks or who flew the most missions”, as many amateur writers seem to think. Evans believes it is more about the people “who changed our perspective on the world…and fixed…our imagination on the Universe around us”.

It’s impossible to tell what the book includes from chapter titles and sub-headings such as “Rise from the ashes”, “lost mission” and “meeting of minds”; they are so clichéd or general that they are barely worth including. This reflects the main problem with the book and the series of which it is a part: it is a continuum of text, broken only by the occasional heading and photograph; almost a stream of consciousness with no clear aim (save to publish another book). This means there is no real structure and little analysis or commentary, simply an enthusiast’s diatribe.

That said, the book reads well and many ‘space enthusiasts’ will enjoy it, not least because it concentrates on the Space Shuttle and other manned missions. Clearly this is what the author considers such a “great joy” and, while we have already agreed that people are important, I can’t help feeling that he is missing a trick. What about the people who designed, built, tested and operated the manned space systems he enjoys writing about? Having diplomatically poured scorn in his preface on those writers who detail spacewalks and missions, the author continues to spend the following 450-odd pages writing about just that.