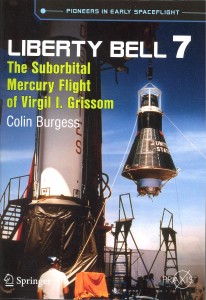 Following his book on the first manned Mercury flight, Colin Burgess and his publisher, Springer, have moved onto the second flight – you can see a series in the making, can’t you? Virgil Grissom’s suborbital flight, being the second of the series, might have disappeared in the mists of time had it not been for the unfortunate fact that it was his capsule that disappeared below the surface of the Atlantic Ocean. The issue of whether or not Grissom ‘blew the hatch’ – in error or in panic – has gone down as a space story that leaves a bad taste in the mouth (how could they criticise a guy who had risked life and limb to make America great?).

This book would not be complete without recounting the story and the support Grissom received from the friends and colleagues who knew him, but it doesn’t really resolve anything. In the end, we have only Grissom’s word that he didn’t blow the hatch, because he was alone in the capsule, but it would be nice to think that a line could be drawn under the issue to give him the benefit of the doubt. This book tries to do that, but unfortunately each repetition of the tale only propagates the doubt.

This volume of the Mercury story begins with the design of the Mercury capsule, and will appeal to those who like the ‘nuts-and-bolts’ side of things. Following a chapter on Grissom himself, it continues with launch preparations, the flight and the recovery. After that, there is a section on Grissom’s Gemini mission and his untimely death in the Apollo 1 fire. All told, it’s a rather sad story.

An epilogue features the recovery of Liberty Bell 7 from the ocean floor in 1999 and its subsequent restoration at the Kansas Cosmosphere. It should have marked a happy end to the story, but the hatch was never recovered and the possibility of ‘closure’ on that issue was denied. The book is profusely illustrated with monochrome photos and it has references, appendices and an index. A capable addition to the series.