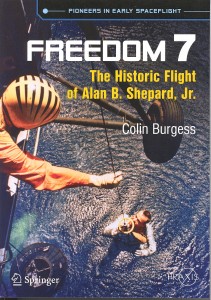 I often wonder how many Americans can actually name the first American in space. Was it Neil Armstrong, John Glenn or perhaps Buzz Lightyear? The fact that someone called Alan Bartlett Shepard made the first US suborbital spaceflight on 5 May 1961 will come as a surprise to many; the fact that the flight lasted a total of only 15 minutes and 22 seconds (including just under five minutes of microgravity) should place the difficulty of early spaceflight in stark perspective. As the title of this book tells us, it was a historic flight!

In fact, the book begins with the history and development of the Mercury-Redstone programme and the flight of chimpanzee Ham before introducing Shepard and his mission.  This is fair, because it would be quite a stretch to base a whole book on just 15 minutes of history! Subsequent chapters detail the countdown, those 15 minutes of fame, the splashdown and the celebrations.

For those interested in space history, much of the book will seem familiar, but there are aspects of Shepard’s ‘right stuff’ character that deserve repeating…such as the protracted launch delays that demanded the famous ‘bathroom break’. The discussion with Capcom Gordon Cooper is a gem: “Gordo?”; “Go, Alan?”; “Man, I got to pee!”; “You what?”; “You heard me. I’ve got to pee…”.  Eventually, it was agreed that Shepard be allowed to “go in my suit”, as he put it…but they had to switch the power off first in case it caused a short circuit. You couldn’t make it up!

On the other hand, the book includes some lesser known information in the guise of photographs of the flown Mercury capsule being delivered to the London Science Museum for display. Craning the capsule onto the pavement outside the museum seems somewhat low-tech considering it was supposed to be the Space Age, while a picture of it mounted on a simple trolley in front of the entrance is quaint (especially considering the handbags and flat caps of the attendant crowd).

Finally, the transcript of voice communications is illuminating in its brevity: the whole transcript from the “one minute and counting” mark to the splashdown covers only four pages.  The book has references and an index, and is thus not targeted at the general reader, but it’s short, well-written and covers such an important piece of history that I can’t see why anyone wouldn’t want to read it.