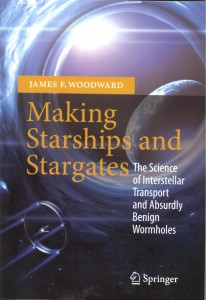 The making of starships and stargates is not a topic that keeps most people awake at night, but you get the feeling that this author has lost an inordinate amount of shut-eye pondering the problems.  I mean, you’d think he must have missed at least a couple of hours coming up with a subtitle that includes the phrase “absurdly benign wormholes”; in fact he borrowed it from some other physicists.  Whatever, I guarantee you won’t hear that phrase again this year!

The foreword of this unusual book starts with the now-familiar premise that Earth could one day be wiped out by a marauding space rock…which means we’d better find a way to leave and settle elsewhere.  It introduces the author as someone with a “thorough theoretical grounding in general relativity and a considerable talent as an experimental physicist [who] has pioneered ‘outside the box’ thinking aimed at solving the propulsion problem and perhaps even the problem of creating exotic matter for wormholes and warp drives” (in other words, a unique individual!).  “The book you hold”, it continues, “may offer the key to human travel to the stars” (hmmm, better not lose it then).

I wish I could comment sensibly on what follows, but I left Mach’s Principle and inertial frame dragging in the physics lecture theatre, and moved on.  That said, there is some interesting history of science here, before the equations start, and it’s written in an off-beat and strangely engaging style. A such, it will appeal to people who like to read complicated stuff even if they don’t really understand it.

The book is illustrated with monochrome and colour photos and diagrams. My favourite is a ‘photoshopped’ image of business passengers at an aircraft boarding gate with an “absurdly benign wormhole” superimposed; the departure board reads “Titan City” and the Titan terminal can be seen through the wormhole.  Now I know this is all fictional, but you’d think the author would know that Titan is a moon of Saturn, not Jupiter as the caption purports!  At the other end of the scale, arguably my least favourite image caption is one that reads “A time slice hyperspatial depiction of the hypothetical “foam” structure of spacetime at the scale of the Planck length…” (go figure!).

But however much fun I make of this book, we should remember that it has been published by a respected publisher, which implies that it was vetted and commissioned in the usual way; in other words, it’s not some vanity publishing project.  That said, it is very much a case of caveat emptor (buyer beware!).