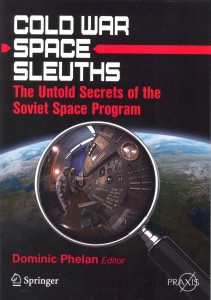 Those with an interest in space exploration who can remember the days of the Soviet Union will probably also remember the Kettering Group, led by the late Geoff Perry, and the occasional articles in space magazines from those who, like Perry, enjoyed digging out even the tiniest morsel of information on the closely guarded Soviet space programme.  Of course, even after the dissolution of the Union, when travel to Russia became easier, the information remained to be unearthed.  The band of excavators who signed up for the task are the “Cold War Sleuths” in the title of this book.

According to the author, “the first time the unofficial Soviet space watchers were termed ‘space sleuths’ was in a 1963 Popular Mechanics article”.  One form of categorisation divides these sleuths into three groups by date: those writing in the 50s and 60s; those who joined in the 70s and 80s; and those that ‘came of age’ in the 1990s.  Another classifies them according to the language in which they were writing, which clearly had an impact on where they were read: English; French and German; and the Russian of native historians, whose writings only became available after the demise of the USSR.

This book contains personal contributions from a dozen or so well-known sleuths, such as James Oberg, Phillip Clark and Asif Siddiqi, covering the group’s methods, ‘scoops’ and, sometimes, idiosyncrasies.    Much of the text is written in the first person, which works well considering this is all about personalities.  The book is illustrated with black-and-white photos of space sleuths, cosmonauts and the occasional rocket.

Although many of the contributions are from mainland Europe and America, the book has a very ‘British-amateur’ feel, a term that perhaps only Brits will understand.  Not intended as a disparaging term, it refers to the self-trained and demonstrably keen nature of the individuals involved.  Most of the space sleuths, whether British or otherwise, do not hail from the ranks of professional historians, or even engineers or scientists; instead they are self-driven individuals with a passion for their subject. And it is this that makes them special. This book is both a memorial to those who are no longer with us and a tribute to those who are.