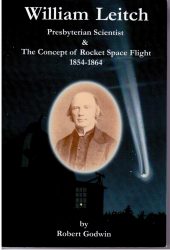 The first question this book brings to mind is “who’s he?”; surely, most people interested in rockets and spaceflight will be unfamiliar with the Reverend William Leitch. Author Robert Godwin is certainly aware of this and begins his book with a question of his own: “why write a book about an almost unknown Victorian Presbyterian minister?”.

No doubt Godwin’s own fascination with space was enough for him personally, but others are sure to climb aboard his investigative bandwagon on reading the introduction to this detective story of space. In a nutshell, Leitch’s theories on the use of rockets to explore space not only predate the factual writing of Goddard, Oberth and Tsiolkovsky, but also the fictional works of Jules Verne.

As Godwin reveals this on his second page, it is not too much of a spoiler to state that since Leitch’s essay – entitled “A Journey Through Space” – first appeared in 1861, it was arguably “the first solid evidence of someone seriously proposing rockets for spaceflight who couldn’t possibly have been inspired by Verne”.

However, one of Godwin’s colleagues was sceptical: “How do you know this person wasn’t just guessing?”, he asked. Could it not be just “a wild proclamation similar to that of the 17th century lunatic Cyrano de Bergerac” (along with firework rockets, his propulsive theories included the rising action of evaporating dew!).

Godwin’s research, which took “the better part of a year”, leads him to answer his colleague’s question with a resounding “this was not a guess”, adding “after reading this book, I hope you will agree with me”. Let the reader decide. The book is illustrated in black and white, as befits the historical material, and has the added benefit of chapter notes and an index.