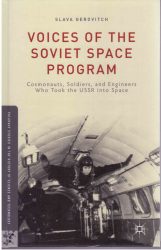 In the early decades of the Space Age, there was very little real information available on Soviet space systems beyond the news reports and the propaganda. While America relied on its U2 spyplanes and equally secretive spy satellites, enthusiastic amateurs tracked Soviet satellites and trawled through obscure documentation to tease out what little data they could. Now we have oral histories, in-depth interviews and books like this – how times have changed.

This particular volume is a history of the Soviet space programme accumulated in the course of several oral history projects undertaken since 2002. Instead of attempting to construct a single ‘true’ narrative of events, says the author, the book illustrates “the different perspectives of Soviet military officers, space engineers and members of the cosmonaut corps”. It does so in 13 chapters divided between sections on “The Soldiers”, “The Engineers” and “The Cosmonauts”, which is a fairly unusual take and somehow ‘very Russian’ in that military and engineering professions are given equal weighting against the spacefarers themselves.

One consequence of this is that most readers will be introduced to characters not widely known outside the former Soviet Union: I have to admit that I’d not previously heard of any of the engineers covered and only two of the cosmonauts. So this is not the usual Yuri Gagarin-Sergei Korolev double-act! As the introduction states, the diversity of coverage adds “details to our knowledge of Soviet space history and illustrates the diversity of opinion among program participants”.

This is unashamedly an academic history: its 40 pages of chapter notes and 15-page index attest to that. The majority of the text consists of interview transcripts and the book is sparsely illustrated with black-and-white photos, chiefly of the main protagonists. Its content, style and relatively high price means that it will appeal mainly to academic space historians. That said, it remains accessible to anyone with an abiding interest in the Soviet space programme.