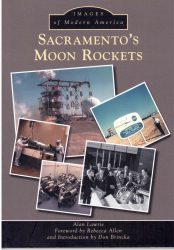 The Space Age has been considered to be sufficiently mature to warrant historical investigation for some time now, as witnessed by the many books on space history. Moreover, the days of early rocket development for space exploration are now sufficiently distant for the label of industrial archaeology to apply…and it is this genre that this little book fits into. It tells the story of Douglas Aircraft Company’s Sacramento test facility or ‘SACTO’.

Following a one-page Foreword by an architectural historian and a three-page introduction by a former chief test conductor at SACTO, the book is essentially a photo essay with extended captions. Most of the photos are in colour and the book is well produced, but there is no index. Perhaps the author and publisher felt that, given the relative brevity of the book, it was unnecessary; but it would have been easy to achieve and would have added significantly to the volume’s usefulness.

What the book does well is give an impression of the effort required to test rocket stages – from Thor to Saturn – in a part of California far enough from resident populations to be safe but still within 15 miles of a city. Think test structures, labs, transport facilities…and when one considers how large the Saturn stages were, it becomes clear that this was a significant undertaking.

Favourite pictures? Hard to say, but transporting the Saturn V third stage using a ‘Pregnant Guppy’ aircraft has to be up there with the best: it had to be split into two parts to load the stage (not just hinging the nose out, but actually separating the tail section). Apart from that, the shots of abandoned facilities give pause for thought: what will remain in a hundred years or so? Concrete and rebar, no doubt; the most durable products of our industrial generation!